This story is about a thirteen-year-old boy called Conor O’Malley. His mum has cancer and everyday he has to take care of himself. At school, he gets bullied by three boys the same age as him. 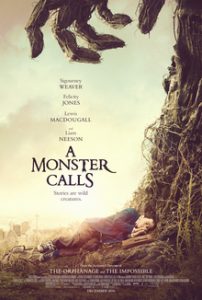 Recently he has been having a recurring nightmare, and it scares him to tell anyone about it. One night, at 12:07, Conor hears his name. He thinks it’s his mum at first but then a colossal yew tree appears outside his window.  The tree says that he will tell Conor three stories, all true. Then he wants Conor to tell him a fourth… his nightmare.

During the next few nights, the yew tree appears, at exactly 12:07, to tell Conor the stories.

At first he is reluctant to listen, but after the first story, is eager to know more. When the time comes for Conor to tell his story, he is scared of admitting how he actually feels because he thinks that if he says it out loud then it will become true.

This film uses brilliant animation to create a “fairytale-ish” narrative and is a beautiful dedication to the book, by Patrick Ness. ‘A Monster Calls’ is an emotionally-raw film for young viewers and addresses topics of bullying and cancer.

"Thank you so, so much for putting me in touch with the Family Action programme. It has made us feel as a family that our lives can move forward. However, this would also not be possible without the great support that 'young carers' offers! The change I have noticed in our child since our involvement has been nothing but positive. Keep up the good work!" ...recipient family