Sheriff of Gloucester Coun Collette Finnegan has called for police, fire and ambulance services to come together to support young carers this Autumn.

As part of her historic role in the city she is holding a special event at Hatherley Manor on Friday, September 20.

During her year in the role she has nominated Gloucestershire Young Carers as her chosen charity and the event on September 20 is being dedicated to raising funds for the worthy cause. 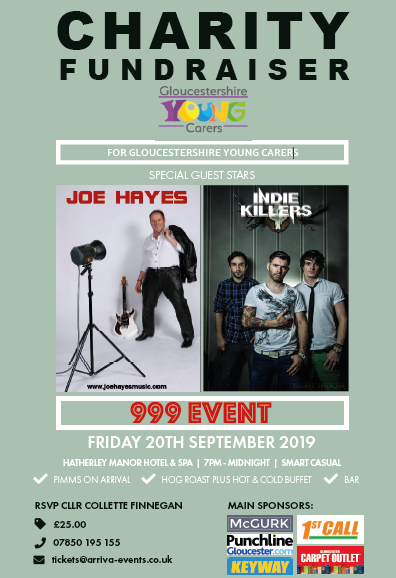 Having been involved in a 999 party in the past Coun Finnegan decided to revive the event.

“I was a nurse for 30-years and we used to have 999 parties quite regularly and they were always really entertaining,” she said.

“A short while ago I was at a NHS party and there were representatives from the other services there, we were reminiscing and having a laugh about it.

“Thankfully, they all agreed and the take-up we’ve had so far has been brilliant. The fire service, police and ambulance service are all on board, as are Imjin Barracks.”

Tickets are available for £25 for uniformed personnel and their families.

Gloucester businessman Eammon McGurk – one of the event’s sponsors – is selling corporate tickets for £45.

A full event is planned from Pimm’s and Irish dancing on arrival to a pig roast, casino, live bands, a live solo singer and a top band to close the evening.

“We have some great sponsors on board with Eammon McGurk, 1st Call, Carpet Outlet and Punchline as well.

“And ticket sales have started well with around 70 or so sold, but we’re hoping to push that to more than 200 to raise as much as we can for a fantastic charity.

“There are 7,000 young carers in the county who all do a wonderful job for the people they are caring for, but they need support.

“It’s going to be a great evening with lots planned and I can assure anyone who buys a ticket that they will be getting value for money.”

The school is ... very pleased to have received help, advice and support from you. You have only been in our lives a short time but you have revolutionised our lives, we now feel day to day a sense of coping and it is great to have a 'friend' at the end of the phone who understands" ...recipient family